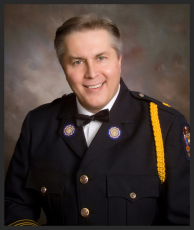 Michael S. Shaw, the Conductor and Music Director of the Band of the Tonawandas, is currently director of the Wind Ensemble at Frontier High School. Mr. Shaw began his tenure at Frontier in 1990 with only 26 band members, and through his leadership the program has grown to include three bands with over 200 students participating. Under his direction, ensembles at Frontier have achieved many 'Gold with Distinction' and 'Superior' ratings at both State and National Festival evaluations.

Mr.Shaw holds a Bachelor of Music Education degree from the State University College at Fredonia and a Master of Music in Woodwind Performance from the State University of New York at Buffalo. He has studied saxophone with Lawrence Wyman, Edward Yadzinski, and Sigurd Rascher. Mr. Shaw has also done postgraduate work in conducting with Craig Kirchoff, Ray Cramer, Gary Hill and Donald Schleicher. He has arranged many transcriptions for wind band, including "Suite Ancienne" by Johann Halvorsen.

Mr. Shaw resides in West Seneca with his wife Susan and their three children.