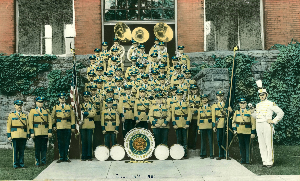 Band of the Tonawandas, circa 1930

The American Legion Band of the Tonawandas was originally organized in 1929 by a group of American Legion members from Post 264. These original members ran numerous fundraising activities, then eventually purchased required band instruments from McClellan Music Company of Buffalo, NY. By the mid 1930's, the Post 264 "Sons of the Legion" Band was winning State competitions year after year. 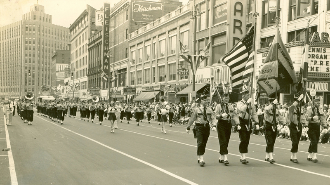 Band of the Tonawandas on parade, circa 1949

Following a break during World War II, the Band expanded due to the eligibility of returning veterans. In 1947, the Band won its first American Legion State Band Championship in Niagara Falls, and in 1949 the Band entered the National American Legion Band Competition in Philadelphia, winning 4th place.

Prior to 1974, the Band had only admitted men as "official" band members; women were strictly limited to support roles. In 1974 women were officially admitted as Band members. With this new influx of talent, the Band repeated as Canadian National Exhibition champions in 1974, 1977, and 1978. 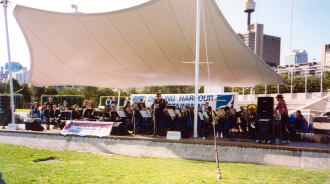 Band of the Tonawandas during one of their Australian performances

2004 was the 75th anniversary of the American Legion Band of the Tonawandas. The year started with a performance at Carnegie Hall in New York City (drawing three standing ovations) and finished with another National Championship title.

During the Carnegie Hall performance

Almost continually since 2006, the Band has defended their National Championship title and won top honors at the National American Legion Band Competition in the years the group was able to attend. The Band currently performs regionally at the Chautauqua Performing Arts Institute (Chautaqua NY), the Reg Lenna Civic Center (Jamestown), the Riviera Theatre (North Tonawanda), the Palace Theatre (Lockport), as well as concerts at many local town parks during the summer.

To learn about the Band's past conductors, click the button below:

To see a photo album of the Band history, click the button below: